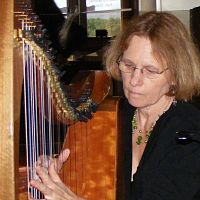 Susan Page Howland began playing the harp at the age of nine.   As a young harpist, Susan was selected to perform at the New York World’s Fair, Singer Bowl in 1965.    In 1966, Susan won the American Harp Society National Solo Competition, Intermediate Division held in Los Angeles CA.  Also that year she was a winner of the Irish Feish Competition, which resulted in an invitation to play in the Irish Feish Winner’s Recital at Carnegie Recital Hall in New York City.

Susan is a 1975 graduate of the New England Conservatory of Music.  Susan studied Harp with Marion Bannerman, Marcel Grandjany, Mildred Dilling and Louise Pappoutsakis, former harpist with the Boston Symphony.

After graduating from NEC, Susan entered nursing school becoming an RN in 1981 and a Certified (Lamaze) Childbirth Educator in 1986.  Since 1990 she has been involved in liturgical music as a choir member and guest harpist. In 2010 she became a Certified Music Practitioner through the Music for Healing and Transition Program and plays music for the ill and dying.

Susan is also the parent of a former Pakachoag Music School student.

Susan primarily teaches and recommends (for younger, beginner students) lever harp which is suitable for beginner folk and classical repertoire. For students with an interest in pedal harp, please call for more information.