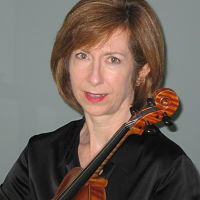 Laurie Knorr attended Truman State University in Missouri as a violin major, receiving her BME and MA.  After graduation she began teaching violin as well as playing in the St. Louis Philharmonic.  After moving to Massachusetts she pursued Suzuki training at the Suzuki School of Newton and also at Ithaca Suzuki Institute.
Laurie taught for several years at both Thayer Performing Arts Center at Atlantic Union College and the former Performing Arts School of Worcester.

Laurie plays regularly with the Thayer Symphony Orchestra and has also played with the Worcester Symphony, Massachusetts Symphony and Symphony Pro Musica.

Here, you can hear one of Laurie’s Suzuki Group classes perform in concert.