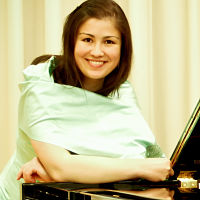 Kamilla Isanbaeva, recognized as a virtuosic pianist at an early age, has performed in concert halls throughout Europe, including Amsterdam’s Concertgebouw and Vienna’s Musikverein.   In 2013, Kamilla was invited to perform in several major music festivals in Switzerland and Germany, with additional solo tours in China and Japan.

Kamilla was born in Tashkent, Uzbekistan.  At the age of 5, she was accepted into the Central Music School, supervised by the Tashkent State Conservatory, where she started her education as a pianist, organist and violinist.  From the age of 10, she participated as a pianist in many national music competitions and won several prizes.

In 1994 Kamilla, as a teenager, immigrated to the Netherlands where she was admitted to the Young Talents Class at the Conservatory of Amsterdam.  During the following years, she performed regularly in the well known concert halls of Europe, a.o. Concertgebouw Amsterdam.  Kamilla also took part in numerous piano competitions for young talented musicians and received several important prizes.  Already at this early stage of her career, Kamilla was considered as a young virtuosic soloist by established professors.

In 2000, Kamilla undertook a Bachelors Degree program at the Conservatory of Amsterdam where she founded the Kafka Trio which went on to participate in many respected music festivals and concerts. She continued on with a Masters Degree during which time she was invited for one year to Freiburg in Germany to study with Prof. Gottlieb.    Her masters degree examination in 2008 was considerably successful and lead to international radio streaming.

In 2010, Kamilla relocated to Vienna, Austria where she performed with several well-known international performers and participated in various festivals.  In 2011, Kamilla  recorded her first CD under the label “Capriccio” with cellist Harriet Krijgh.  Part of this program was performed on the Dutch radio, with live streaming out of the Concertgebouw, Amsterdam.

In 2013, Kamilla was invited to participate in many big music festivals such as Sommets Musicaux in Gstaad, Switzerland;  and the Schwetzingen and Rheingau Festivals in Germany.

From 2012 to 2015, Kamilla lived in London where she worked at the Guildhall School of Music and Drama, the Royal College of Music, and the Royal Academy of Music.

In Fall 2015, Kamilla relocated to the Worcester area with new family connections; and joined Pakachoag in the spring of 2016.