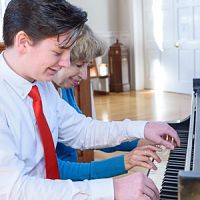 Andrew Lefferts, of Oxford, will join Inna Muranik in a piano four-hands Brahms arrangement on Saturday, April 29, 2017 at 4:00 pm

Andrew is seventeen years old and is the seventh of eight children, all of whom have studied piano with Inna.   The families enrollment at Pakachoag has spanned more than 20 years making the Lefferts the School’s longest enrolled family.  Andrew has taken lessons with Inna since he was six years old.

Andrew writes:  “I have not only benefited from Inna’s technical instruction and constructive critiques, but especially love to learn by listening to her play. Most importantly, Inna has taught me that mistakes can be perceived as something to learn from, and nothing can be done without diligent daily work”.

Andrew is a member of the Worcester Children’s Chorus, and has participated for several years in theory classes at Pakachoag.  He writes his own music which has included a few submissions for video game competitions and computer performed orchestral pieces, as well as music for solo piano.

Last summer Andrew participated in the Lyra Music Festival at Smith College.  His end of festival performance of Schubert’s fourth Impromptu earned him a review noting “the most satisfying performance of the afternoon, with proper attention to the many dynamic changes in this beautiful piece.” (The Daily Hampshire Gazette, Mark Morford).

Andrew plans to take a gap year in 2017-2018 while preparing to pursue music as a major in college.